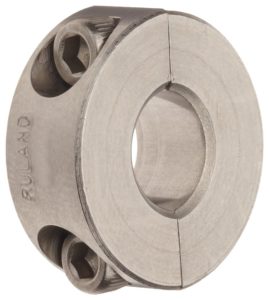 The first mass-produced collars were used primarily online shafting in early manufacturing mills. These early shaft collars were solid ring types, employing square-head set screws that protruded from the collar. Protruding screws proved to be a problem because they could catch on a workmen’s clothing while rotating on a shaft, and pull them into the machinery.

collar evolutionShaft collars saw few improvements until the early 1900’s when Howard T. Hallowell created the first recessed head socket set screw shaft collar. Hallowell received a patent on his safety set collar, which was soon copied by others and became an industry standard. The invention of the safety set collar was the beginning of the recessed-socket screw industry.

Set screw collars derive all their holding power from the screw as it is tightened onto the shaft. Holding power depends greatly on the shaft material and condition. For a set screw shaft collar to achieve maximum grip, the shaft must be of softer material than that of the set screw. This allows for impingement of the screw point into the shaft, which keeps the collar in its installed position under torque and axial loads, and prevents it from sliding along the shaft.

Set screws tend to damage shafts which is undesirable for functional and cosmetic reasons. Screw impingement causes an eruption of material around the screw resulting in a raised burr on the shaft surface. This raised material makes it difficult to remove or reposition the collar. The invention of the clamp-style shaft collar solved the destructive issues associated with the set screw. Clamp collars utilize compressive forces to lock onto the shaft without any damage.

Nobody is certain who first invented the clamp-style shaft collar, but they have been around since WWII when they were used in bombsights and guiding systems. These mechanical instruments consisted of precision gearing, differentials, couplings, and collars in combination with electrical selsyn motors, resolvers, precision potentiometers, and a variety of electronics. At the time, they were considered high-tech, top secret, and were cutting edge precision components.